Last Tuesday morning the house was full of tears, screaming, crying that involved gasping for breath and a good deal of whimpering. And the baby wasn't here.

For the majority of CeCe's life, I have walked a beautiful line of part-time working mom, part-time stay-at-home mom. I went into an office three days a week and stayed home with the baby the rest of the time. It was a great combination. Until my freelance gigs began picking up, the laundry was being stacked on top of more laundry and CeCe's naps became shorter and less frequent. The tight rope I had been walking suddenly felt like it was covered in vaseline.
Last week we decided to put the babe into daycare full time. And by "we decided," I mean Matt had been telling me I needed to do it for months, and I would say, "I CAN DO EVERYTHING MYSELF! I'M A FREAKING MOM!" as I had the baby on my hip, dinner burning on the stove and a laptop about to die before I saved my latest draft.
I thought the transition would be easy since I was already used to part-timing it. But when it came time last Tuesday for what would have been Ce's first nap-time wake up, I realized there was no smiling baby waiting for me in her crib. No chubby legs standing against the rail, chubby hands ready to play with some stacking cups and an obnoxiously loud Baby Einstein toy.
Guilt is a major part of motherhood. Of the emotions I feel daily when I see my daughter, guilt ranks right after love, adoration, and fear.
But why? My daughter loves her daycare facility. The assistant director called me one day to ask if she could take my child home with her. Matt has expressed a legitimate fear that one of the teachers will abduct CeCe, because they love her so much. So why should I feel guilty about leaving her in this environment?
I miss her so much each day. Wouldn't you miss this face: 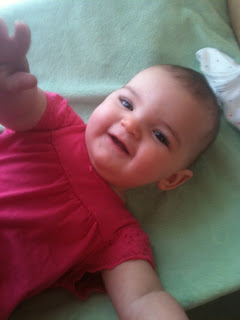 But I also had to realize that when she was at home with me, I was constantly saying "Sit still for one minute honey, mommy needs to wash the dishes," or "We can play for twenty minutes, but then I have to work, sweetie."
At daycare, she is surrounded by other kids and adults with plenty of attention for her. And when I get all my work done during the day, that is more time in the evenings to devote entirely to the princess.
I thought I had the best of both worlds. Stay at home moms have a lot on their plates, and working moms deal with some severe depression.
Tell me readers, how did you handle the guilt or any other feelings about childcare?
Posted by Katie S. at 5:50 AM

Email ThisBlogThis!Share to TwitterShare to FacebookShare to Pinterest
Labels: Childcare