It's time for an installment of My Favorite Things!

I mentioned this toy after CeCe's birthday party and it has been a hit ever since. She is getting more enjoyment out of this drum and the musical instruments than I thought she would at just one year old. 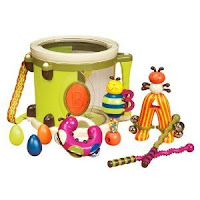 The drum is called the B. Parum Pum Pum Drum.
CeCe's aunt got her this drum at Target, but I found it for sale on Amazon as well. It was listed as $32.99 but I would add in an extra $10 for the Excedrin you will want to buy with it.

What makes it great are the different parts- the egg-shaped shakers, the strange bug who has a triangle cut between his legs and the tambourine are perfect for growing hands and different grip strengths.

We had to take the drum sticks away for now because CeCe would stick them in her mouth and try to walk around. I could see the ambulance lights flashing in her eyes when she did that. But she has a good time beating the lid with just her hands: 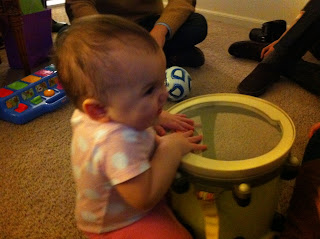 ﻿
And even when all the instruments and lid have been removed, my daughter still found a way to have fun. See how creative she was: 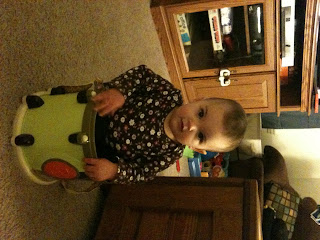