With my daughter's birthday in late November, it doesn't take a math whiz to figure out when she was made. That's right, my little cupid was a Valentine's Day baby. So here we are, two years later. Valentine's Day with a toddler.

I awoke to early morning screams from my baby and discovered her fat little leg stuck in between her crib rails. As I tried to rock her back to sleep, she repeatedly tried to shove her paci in my mouth. I decided it was time to get up and hope she had a clean shirt with hearts on it. I mean she only has seven so the odds were in our favor.
Matt (being the super amazing man he is) had flowers and my favorite goodies laid out on the table as soon as we walked into the kitchen, so he must have James Bonded that plan while I was sleeping. Points for daddy. 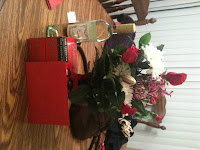 The day was full of work because the world doesn't stop for those who are in love. I planned for a romantic evening as a couple, but my child had other plans.
First- CeCe's hair was covered in cupcake crumbs from her daycare treat, so I figured why not! Let's go for broke and bust out the spaghetti! She enjoyed a lovely Italian dinner for Valentine's Day. 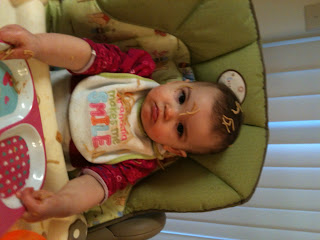 Since she was now covered in cake, spaghetti and ketchup (I may have omitted part of this story), it was time for a luxurious Valentine's bubble bath. It wasn't what I had exactly hoped for when I thought about getting dirty on Valentine's Day, but you do what you gotta do.
While I ran her water I made the mistake of allowing CeCe to rip her diaper off before it was time to go swimming. Before I could even form the word "NOOOOOO!!!!" in my head there was a pile of baby poop on the carpet.
Since we play "chase" frequently, my mad dash for her was mistaken as a game and she took off running through the kitchen- but not before stepping straight on the poop so there were tiny poopy footprints throughout my house. I really hope my landlord doesn't read this blog.
After cleaning up the crumbs, the ketchup, the pasta and the poop, there was some brief playtime before bed, then Matt and I enjoyed approximately half of our V-Day movie before I began to fall asleep and rainchecked the remaining 50 minutes for another night.
In the end, it was a happy Valentine's Day. Not one that Hallmark might write about, but this one had a dash of romance, a heavy heap of crazy, and plenty of love mixed in with it all. 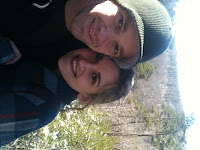