Setting Limits for the Screen

It had become as routine as blinking in our house. Without realizing it, my family had become so accustomed to having the television on that we didn't even think about it when we walked in the door each day. Drop the keys, kick off the shoes, grab the remote.

It hit me the day I did not turn on the TV and my 1-year-old pointed at the screen and started whining. When I said "no," it was a full-on brat attack.

The American Academy of Pediatrics recommends that children under 2 not watch any TV, or have any screen time. Since my 16-month-old can unlock my iPhone and access her animal flashcard games, I think that goal is a bit unrealistic.

Matt and I decided to severely limit screen time in our house after the TV tantrum. The rules:
One hour of Mickey Mouse for CeCe each day. An episode while we get ready for work in the morning and one in the evening.
Mom and Dad don't leave the TV on unless we are actively watching something. This has spiked because of March Madness, but overall is much less.

The results?
We play outside for longer stretches of time, and CeCe will even run to the front door and bang on it wanting out.
Daddy gets his work done quicker and Mommy reads more books.
And my favorite outcome of it all: 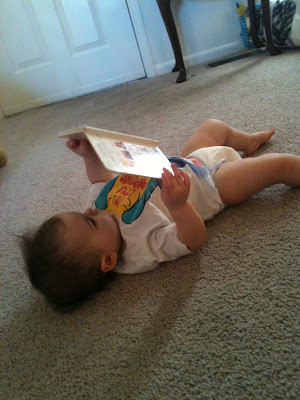 My little bookworm cracks me up. While we haven't eliminated TV entirely, I think limits on the screen are a great thing for a family of any age. You can read about the guidelines from the AAP and more info about the effects of too much screen time for children here at kidshealth.org.
Posted by Katie S. at 5:50 AM