So instead I will recap here:

First, CeCe had her last soccer games of the season. It was a double header, for a team of 4- and 5-year olds. You can imagine how closely they were paying attention by halftime of the second game.

It was 50 degrees, so CeCe insisted on wearing her new hat and mittens. At least the giant pink pom-pom made her easy to spot on the field. She had a great kick during the first game and a look on her face that one mom described as "Look! I'm soccer-ing!" 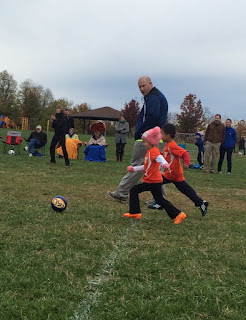 The soccer game was followed by CeCe's first haircut. Yes, her FIRST haircut. She will be 5 years old in three weeks, and this was the first time scissors ever touched those precious locks. But the bed-head snarls, tangles and rat's nests had gotten out of hand. Here is her "Before and After" shot. 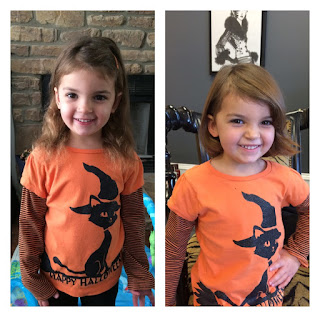 Next, Ezra decided he was tired of all this dang tummy time I put him through. So at 9 weeks old, he did this:

After Ezra's feat of strength, it was time to get dressed for trick-or-treat. CeCe chose to be Snow White this year, with her little brother as her dwarf. Pretty much every idea she had consisted of "I can be ______, and Ezra can be my ______". Little brothers make fabulous Halloween accessories. 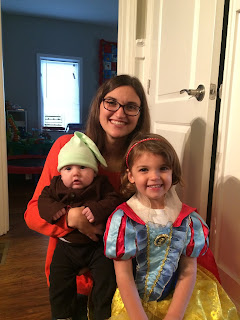 The last weekend of October was quite eventful for us. Let's see what good things November has in store!
Posted by Katie S. at 12:26 PM